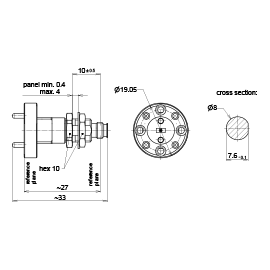 Particle therapy is used in cancer research and treatment. For such radiotherapy treatments, medical particle accelerators are used to cure diseases or delay their progression with ionizing radiation.

Radiation therapy in general involves irradiating tissue with particles to use their energy as they decelerate in the surrounding matter, the cell tissue. This is intended to cause DNA damage in order to destroy cells. In addition to gamma, X-ray or electron radiation, neutrons, protons and heavy ions are also used.

Ion beam therapy in particular is an innovative therapy form of. An important benefit is that exposure of the healthy tissue in front of the tumor to the radiation can be reduced and almost completely eliminated behind it. Since this approach significantly reduces unwanted side effects, it is an excellent way to treat tumors near radiation-sensitive organs.

Highly complex, specially developed state-of-the-art systems are wielded for this purpose. Such facilities comprise a therapy section, an accelerator area and possibly a separate research lab.

In the first section, the linear accelerator, charged particles are pre-accelerated to an initial speed and passed through into a circular particle accelerator, the synchrotron. It increases the velocity of the protons to two thirds of the speed of light before feeding them into an irradiation room. In addition to horizontal and vertical fixed beams, there is also the possibility of moving beam guidance - with a so-called gantry. To accelerate the particles in the accelerators, very powerful electric fields are built up that require large amounts of energy. This energy is transmitted via radio frequency waveguides.

We have been developing and supplying special radio frequency rigid lines for a variety of fusion research projects since 1967 and are proud to continue supporting cancer research and treatment today.

MedAustron, one of Europe’s most advanced centers for ion beam therapy and research, opened in Wiener Neustadt south of Vienna, Austria in 2011. In addition to treating patients in clinical trials, the center also hosts nonclinical research.

SPINNER, leveraging its many years of experience in the field of radio frequency technology, produced coaxial RF rigid lines for the ion therapy center. In cooperation with CERN, the European nuclear research center, we planned and produced 3 1/8″ EIA and 6 1/8″ EIA RF rigid lines on schedule and then installed them on-site from the klystron to the particle accelerator.